Procrastination Behind the Scenes 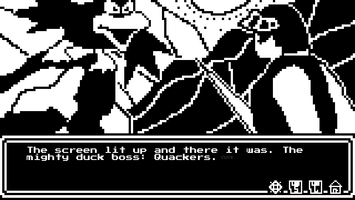 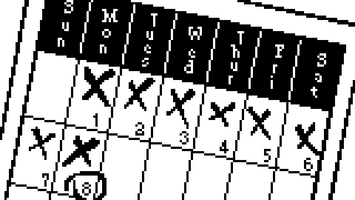 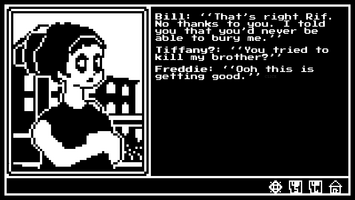 After I completed charlmes first game jam with The Ugly Game, I still had to think up some new activity for the summer. The original goal of that game jam was to reacquaint myself with Ren'py and introduce my daughter to game design. It was a lot of fun to see her come up with her own concepts and try to apply them. So I looked for another one to tackle with the focus on improving by mastering variables (the thing I personally struggled with on the first jam).

So we saw a relaxing months long game jam like Sunofes and we decided to join that. Then charlmes posted the I Can't Write But Want To Tell A Story jam and it seemed catered directly to us. With about 1 month of breathing room before the jam actually began, we started to work on story concepts. Since she had just finished the Hobbit, I tried to teach her story structure based around that. I took Dan Harmon's approach of the Circle since it's the Monomyth compressed down to the simplest form I've seen yet.

So we talked about it and she figured out how to tell a simple story. From there we made up a writing exercise where I asked her to come up with 6 stories. I chose 6 random topics: Space, Scary, School, Animal, Fantasy, and Superhero. She came up with a sentence for each section of the Circle and in turn came up with 6 different story ideas. Since we had no idea what the topic was about, it seemed reasonable to have a backup. From that list she combined her Fantasy and Animal story into one of a Unicorn that is ostracized by its fellow unicorns, falls asleep, and travels through dreams helping people.  I loved the concept as it felt Sandman meets The Last Unicorn.

Meanwhile I had nothing processing through my brain. Since the debate of will she be online or in school this year was hanging over our household, I decided that was what I would try to do. So I wrote down a quick story and then began working through hers with her. For inspiration, we watched The Last Unicorn, Galaxy Express 999, Night on the Galactic Railroad to help her come up with story elements. I pulled out all of her books that could help like Unicorn on a Roll and My Little Pony books as inspiration.

As for me, I procrastinated.  The idea I was kicking around in my head was a concept of a boy who didn't want to go home because nobody was there. His mom was sick and his Dad had to work all the time.  I didn't know where to go with this, but this was the foundation for my story since I had no idea what the optional theme was going to be. If charlmes revealed it was a scifi or fantasy theme, I'd be screwed.

I watched Bill and Ted earlier this summer with the kid which acted as inspiration and then decided I needed to build a new UI since the default Renpy one was so generic. So I did.  I used the Imagebutton GUI Framework from Leon and tried to learn how to build a screen. I had a blast. I had no story, but I had a blast. I did struggle though as I tried to figure out why my Menu screen worked but my options didn't. Once I figured the options are linked to everything, it all clicked as I solved the puzzle. It was a good way to pretend like I was doing something creative while I kicked the story can down the road.

I looked up art styles since I was teaching the kid how to do pixel art in photoshop. I was getting inspiration from Seiken Densetsu with their box layout and Lane Mastodon with it's neat book idea. That's probably where I got the inspiration to make it monochrome. I also had no idea how much art I would need to make so it really helped simplify things for me. From there, I got a manga vibe and drew inspiration for the art style from old mangaka.

Then the game jam begins and the kid and I start on our stories based on being lost (which was perfect for her). I had a concept, and I'd made a schedule of what a school would be and just went through the motions. Her concept was great, but she was just struggling to do something with it. So we were underprepared which is fitting for a jam called I Can't Write But Want To Tell A Story.  We worked hard. I started coming up with basic scenarios. I turned to her and she gave me the ideas for Eugene, Dee and Charlize.

I gave her a number of ideas, but they all seemed to be falling flat with her. She had a story she wanted to tell, but couldn't get it out. She became frustrated as she would get stuck entering the dream world and figuring out how to get her characters to interact in the world. I threw dozens of ideas out, but they weren't the story she wanted to tell. So about a week in to the jam, she was so frustrated she just didn't want to do it anymore which was the exact opposite reaction I was going for with these exercises.

So I told her to work on the first game we ever attempted which was the 3 Little Pigs. Since the idea was to learn variables, that was more important than whether her Unicorn story would work out. This actually motivated her far beyond what I'd seen with her Unicorn story. She worked hard on her shortened time frame as she started learning how to implement imagebuttons and variables. The whole idea she was working with was that the wolf would run out of breath as he went along his path to the pig's house. It was simple, but she was doing her best to implement a deduction system.

I was still struggling as I had no end game. I had ideas bouncing around, but every story I made had to be cut short due to time. The protagonist started off having 2 weeks to create his story. Then it became 10 days. Then 8. My idea shifted to making an educational game since I knew my daughter would play it. It would be about overcoming hardships. It would be about learning new concepts. It would be about understanding to never give up.

Still though I had nowhere to funnel that game. I remember waking up in the middle of the night with an idea for an achievement system. That became my priority instead of a story concept. So I made a screen and created the system. That then borked my game and I spent hours trying to figure out why my persistent wasn't working. It's hard when you misspell one thing and it just breaks everything. Then I realized halfway through the game development that the font at 14 left trails. Since I had my text speed at 100, I didn't know about this until 1/2 way through and had to adjust my nvl entries so they wouldn't run off screen by changing the font size. It looked perfect before and now I'm unsatisfied with it. I had to make a compromise though and so I put a bandaid on an issue and moved forward to get the game turned in on time.

I was procrastinating since I had nowhere to go with the story. So I found little things to make perfect or add to instead of writing the game out. Eventually, it was the day before it was due. I fixed everything to the best of my ability and still had the game's 4 major events to type out. In one night after the kid went to sleep, I wrote the football game and the end game. The idea was that the people he had drawn inspiration from would all bring the main character his inspiration in his speech. That just couldn't happen. I snuck a bit of it into the football game, but I couldn't get it to work with the speech. I tried, but I also wanted to have the mother to be there for our protagonist and that was just too many if and else statements for me to do at 3:30 in the morning.

My  daughter had finished her game a full day before it was due (just like last time). So I had spent a part of the final day running grammar checks. She had helped me find all the sentences that ran over in my game, so I helped her with as much grammar as I could on hers. We'd write them down on notepads as a means to help her grow her handwriting skills that she's picked up with at PT.  By the time she was done, she started coding a new game in pico-8 so it seems I need to learn how to do that now.

So she finished her game. I was dead tired, but we went and spent the final day painting an electric guitar DIY kit as a reward for completing it. She worked her butt off and even though she didn't get her story out, she got to tell one. I did my best with this game and worked on it until the 11th hour when I had to turn it in. I'm a bit disappointed in myself that I had to patch it day 1 because of dumb errors. A missing = on the last day, an imagebutton in the wrong spot and a 7 where a 6 should be and the game would have been complete on launch.

My game went from a simple idea of a kid struggling to write a story, to a story about people and the relationships we create with them. Instead of it being a boy lost, it's the people he meets that are lost. I fear the procrastination angle might have been lost as I focused on making a story for my kid and didn't want to push too hard on being lazy and goofing off. You can still do that, but the original concept was lost and a new one was found.

If you do get an opportunity to play the game, please leave any comments about what you enjoyed and didn't enjoy. I added a line spacing configuration in my framework after Inane Cat's comment about the font. I'm not sure if I'll implement any changes in this code as it's entered into this contest as complete, but I am learning from this.

EDIT: I've included a small font version at the recommendation of Tea Hands and I like that it made the bold names pop more like it originally looked, but it might be too small for my tastes. It's an option though since the black on white can be a bit much for some people. Next time I'll think about a slightlydarker shade of white.

Things I wish I could have implemented: